My friend Meg was playing the PC game Stardew Valley recently when she noticed a massive mushroom on her lawn.

Amazed by her encounter with a 2-storey pixel art mushroom, Meg posed some questions about mushrooms in our 3-d world.

In this first installment, I’ll tackle Meg’s first question: What is the biggest mushroom in the world? The answer isn’t as clear-cut as you might think. There are lots of answers. The reason comes back to mushroom biology – as everything eventually does.

A mushroom is just a funny fruit, with spores instead of seeds. It’s the reproductive chapter of a fungal organism’s life. Most people think the mushroom is most of the fungus, but as Hope Jahren* puts it, “This is exactly like believing that a penis is a man.” Most of the fungus’s life story, and its mass, happens in its mycelia, which web through the soil and dead wood gathering resources and finding a good place to fruit. Just like a cherry tree grows through the air until it’s ready to put out some cherries, fungal mycelia roam the soil until they’re ready to put out fruiting bodies. Based on public forgetfulness about the difference between fungal fruit and body, Meg’s question could also be phrased “What is the largest fungus that produces a mushroom?”

According to the United States Department of Agriculture, the world’s largest living organism (“The Humongous Fungus”) is a parasitic fungus, Armillaria ostoyae, which kills trees in the Malheur National Forest in Oregon, U.S.A. The common name for this fungus is “Honey mushroom”, and people like to poorly Photoshop spectacularly large mushrooms to illustrate the size of this thing.

In real life, honey mushrooms – the fruiting bodies of A. ostoyae – generally max out at 4 inches tall and 5 inches wide at the cap. They show up during the rainy season, send out their spores, and quickly die.

Most of the mass of the “Humongous Fungus” in Oregon is its mycelial network, which runs across 2,385 acres (as of 2008). Its biomass, including both mushrooms and mycelia, is estimated at anywhere from 7,567 to 35,000 tons (USDA as of 2008). For you folks who, like me, don’t understand what a ton is, that’s 70 million pounds. On the low end, that’s the weight of the Eiffel tower (7,300 tons). On the upper end, that’s the size of a small cruise ship. Most of that mass is shoelace-like threads embedded in dirt, black on the outside and white within, though a good portion can be seen in “mycelial felts”, mats of A. ostoyae that show up on infected trees like layers of creamy white latex paint.

Crucial to answering Meg’s question is the fact that this 2300-acre web of mycelia is all one organism – one individual fungus, called a genet, that is genetically distinct from the other enormous A. ostoyae in the Malheur National Forest. There are five such genets in the forest, but the second-largest covers only 642 acres – about a quarter of the area of our Humongous Fungus. Age estimates for the biggest A. ostoyae range from 1900 to almost 8700 years, depending on how quickly scientists think it grows. If the genet grows 3.3 feet every year, its parent spores landed while Alexandria was burning. If it is much slower, growing about 0.7 feet per year, those spores landed when proto-Greeks were starting to figure out pottery.

Perhaps I am being unfair to Meg, who was not after the largest mycelial network at all, but the largest fungal fruiting body. In that case, I present to you Fomitiporia ellipsoideus, a Chinese species that made international news when a fruiting body on Hainan Island was estimated to weigh between 880 and 1,100 pounds. It’s about 35 feet long – if you stood it upright, it would peek over the Great Wall of China with almost ten feet to spare.

This fungus is a polypore, sending out new layers of one fruiting body where A. ostoyae sends up and loses brand-new mushrooms every year. Very unlike A. ostoyae, F. ellipsoideus lives on just one log and is probably no more than 20 years old. That is still an impressive lifespan for a fungus, though. Polypores can stick around for a long time because nothing much likes to eat them.

If all this sneaking around below the soil and creeping slowly outwards from a trunk for two decades seems like a cheap way to get ahead size-wise, have no fear. There are also fungal fruits that simply sprout up every year to enormous size – and they’re tasty, too. Remember the puffball the size of my head?

That’s not what puffball aficionados call big. In 1877, New York resident Professor R. Call recorded finding a member of Calvatea gigantea, giant puffball, that was more than five feet wide, four and a half feet long, and nine inches tall – that’s 16.9 cubic feet. It would have fit very snugly inside a large modern bathtub (provided you cut apart first and jigsaw puzzled it into the bath). More recently, in 2012, Canadian grandfather Christian Therrien found a 57 pound puffball. 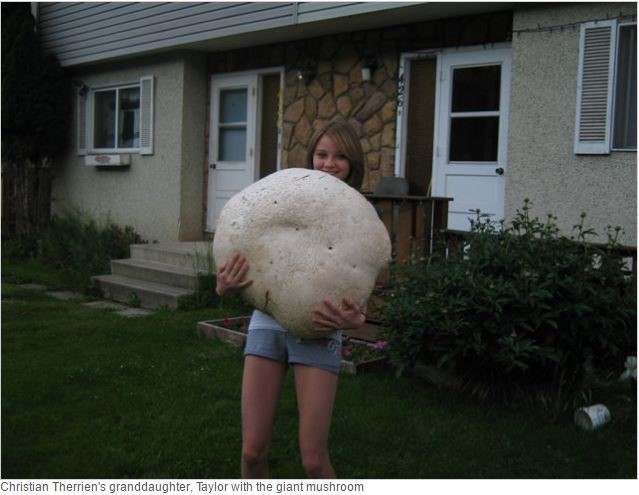 I got this photo from the website of CBC Radio-Canada. There was an accompanying interview with Mr. Therrien, but unfortunately the link is broken.

That’s 57 pounds that all sprouted in a number of weeks, and, if it had not been picked, would be gone again just as quickly. As it is, I hope the Therrien family had some very nice puffball steaks.

I hope at this point that Meg is not too exasperated with me, because the screenshot from the game clearly shows an enormous mushroom, with cap and stipe. Not an enormous mat of underground mycelia thousands of years old. Not a giant polypore with decades under its belt. Not a puffball, which doesn’t have a stipe at all. No, Meg asked about mushrooms. So here we (finally) go.

The title for biggest mushroom is somewhat contested between two species: Phlebopus marginatus and Macrocybe titans.

Records for size of these two species have them going neck-and-neck. The largest ever P. marginatus weighed a whopping 71 pounds, almost twice the weight of the largest M. titans ever recorded (44 pounds). However, the largest M. titans has almost twice as much surface area (5 square feet) as P. margnatus (3 square feet). So while biggest fungus and biggest fungal fruiting body are easy to determine, biggest mushroom is a title that could be decided by a coin flip.

*That amazing quote is from Hope Jahren’s autobiographical book Lab Girl that came out this year. She is a very good writer and her story is fascinating. I highly recommend it!

** If the person in the photo is actually Professor Dai, I’m very sorry. The photo is credited to Dai, which I assumed meant that the professor took the picture. It could very easily be Professor Dai in the photo, which could have been taken by Dr. Cui.