Meg Asks: Are There Amanitas on My PC?

My friend Meg was playing a PC game called Stardew Valley when she noticed a tree-sized, brightly colored mushroom had sprouted in her “yard”.

Filled with wonder, I assume, at finding such a large fungal specimen, Meg posed me some questions with real-world applications:

I covered the question of mushroom size in the previous post. For her second query, Meg wants to know what mushroom this one is modeled after, in terms of coloration (and biology, obviously!). Like most mushrooms in video games, it appears to be modeled after Amanita muscaria, a highly psychoactive – and very toxic! – mushroom in the real world. I’ve encountered a few A. muscaria specimens myself, and the illustration is pretty close to life. As in the game, these mushrooms have a rounded reddish cap, with white spots and a band of extra tissue girdling the stipe (stem), which I explain below. Here is a photo from Mycoportal, a database where field researchers and mycophiles associated with academic institutions share information on their fungal finds. These specimens were collected and determined by Yves Lamoureux on August 21, 1990 in Quebec, Canada.

And here is an image of this species in situ (i.e. in its natural habitat, not pulled up for collection) that I took on August 14, 2014, in the Poudre Canyon of Colorado. 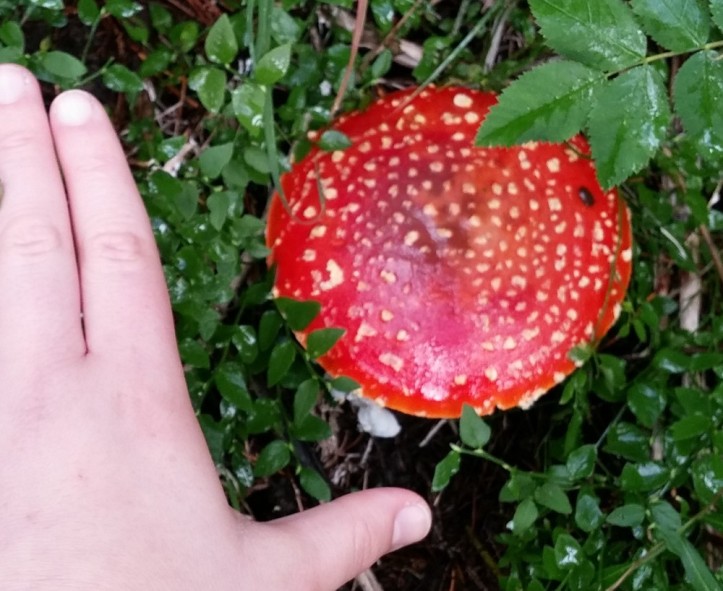 This species is widespread ecologically: Mycoportal has records of A. muscaria from Eurasia (Belgium, the Czech Republic, Denmark, England, Finland, France, Germany, Hungary, Italy, the Netherlands, Poland, Russia, Scotland, Sweden, and Switzerland), from the Americas (Belize, Colombia, Costa Rica, Honduras, Mexico, Uruguay, and the U.S.), and from the Pacific nations (Australia and New Zealand).

The coloration on my Colorado Amanita is much more saturated than Mx. Lamoreaux’s, meaning the red color is richer than it is in the collection from Quebec. This isn’t because United States Amanitas are generally the reddest, as shown by this collection from Sweden:

The color differences arise because many biological species have what are called “variants”. These are slightly different from the specimens biologists used to define the species.

The type specimen is considered a typical member of the species, and newly collected specimens can be compared with it to see if they are the same species. In the image above, the Swedish specimen was used by the University of Tennessee as an example of what you might call the “perfect” Amanita muscaria – all its traits, from color to mycelial texture to spore shape, were recorded, and the specimen preserved, as examples of how to identify this species. (It’s called a “neotype” because it is an exemplary specimen that can be used after the original type specimen is lost or destroyed: “neo” = “new”.)

Species variants define those specimens that do not perfectly match the type specimen for a species, but are very, very close – so close they may still be able to reproduce with the type specimen, and therefore fit the definition of being the same species. These don’t exactly match the type specimen, but aren’t a different species. Variants within the species Amanita muscaria include var. flavivolvata, which is bright red but has a different geographical distribution from A. muscaria; var. alba, which has white caps;  and var. guessowii, the caps of which are bright yellow. These species names are written with the variety after the species name: Amanita muscaria var guessowii.

The spots or warts on the caps of Amanita mushrooms come from something called the universal veil. This is a thin membrane of fungus that surrounds the mushroom like an egg when the fruiting body is just getting started. Unlike a bird egg, though, the veil is meant to be broken. When the mushroom reaches a certain age, the cap becomes too big to be contained in the veil, and rips out of it. The remnants of the veil show up on top of the cap as warts, and fall back onto the stipe to create a distinctive ring or collar that is very useful in identifying Amanitas. Our friends at Stardew Valley were kind enough to include a bit of that veil on the stipe, which is a nice touch of realism for a tree-tall mushroom, and helps us identify it with more certainty. 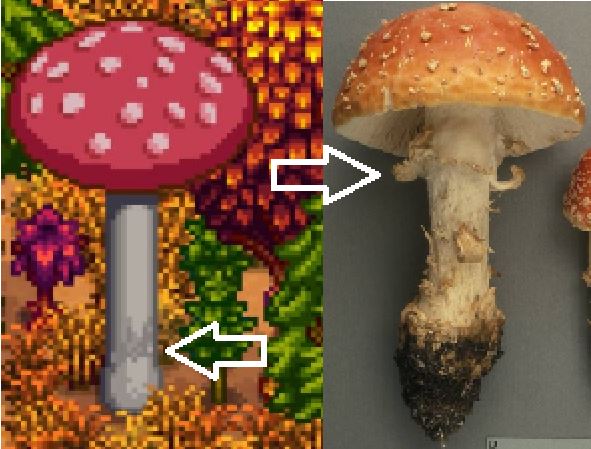 This jagged shadow on the game mushroom evokes the collar around the stipe of A. muscaria that show where the universal veil was torn.

So there’s our answer: the mushroom is Amanita muscaria. As tempting a food source a two-story mushroom may seem, I wouldn’t recommend letting your avatar eat it. They could end up having a very strange adventure…

Note: Please also do not eat these mushrooms in real life. They are legitimately full of neurotoxins.